Home Dogs Interest in adopting a dog has surged during COVID-19, but experts recommend...

By this point, many Americans have been social distancing and self-isolating for more than a month due to the COVID-19 pandemic. And all that time at home, and alone for some, has sparked people to get creative with their downtime.

Some are taking to the kitchen and attempting to bake, or passing time with puzzles. Some are making lifestyle changes they’ve wanted to try for years, but always thought they didn’t have the time to do.

Then there are those who are choosing to get a new puppy or dog — and it makes sense. A pet can provide comfort during these uncertain times; besides dealing with the coronavirus and any personal impacts from it, Utahns were rattled by a 5.7 magnitude earthquake March 18 and continued to feel aftershocks for more than a month.

There’s been a huge increase in interest in animals at the Humane Society of Utah, said Deann Shepherd, director of marketing and communications. The number of adoptions has remained about the same, but animals are finding homes more quickly, she said.

The shelter doesn’t want to have too many animals in its kennels when fewer people are going in to visit, she explained. So the staff has moved dogs into foster homes and adoptions are made through appointment only.

“When there’s not a lot of dogs to choose from, when we put four dogs up [online] they go fast — because it’s like limited selection,” Shepherd said. “So that’s great that they’re finding homes fast.”

Dogs previously would stay at the shelter for about four days on average before being adopted; now she’s seeing dogs get adopted in two days, on average, she said.

With a lot more downtime, Tara Isaacson, a full-time criminal law attorney and part-time dog trainer, has been spending a lot more time with dogs. She is fostering a bunch of puppies at the moment, and has been working online via Zoom to oversee dog owners training their pets. 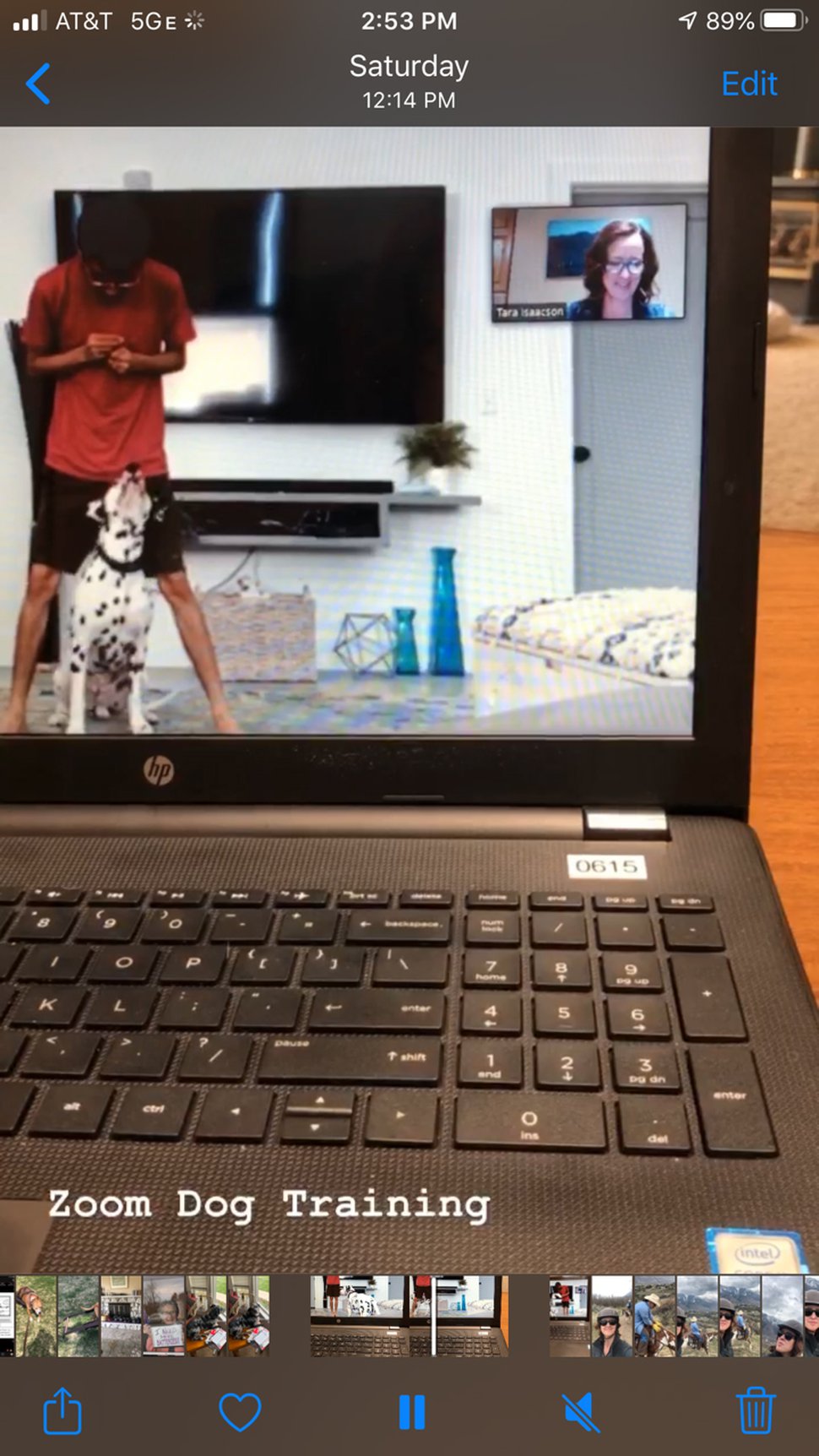 As the owner of Hat Creek Dog Training, she has some advice for anyone looking to add a dog (or any pet) to their home at this time: Really think about it.

While you may have the extra time right now to train a new dog, will the dog still be able to get enough attention and fit into your or your family’s lifestyle once people are able to head back to work?

With the nation’s unemployment rate still climbing, does a new puppy fit into the household’s expenses?

If it’s all green lights ahead and you’re going to start looking for a new dog (or you recently added a furball to your life), Isaacson has some tips for you.

• For puppies, the first 16 weeks of their lives are critical. That is when it’s important to introduce and socialize puppies to as many elements as possible.

• Most important, puppies need to be exposed to new people (even from a distance), animals, places and things. Although people should still social distance, puppies should be taken to parks or puppy daycares.

• Also, it’s important to have them listen to as many sounds as possible (thunder, trains, pots and pans, etc.) so they don’t get scared when they hear them when they’re older.

“I think the most important thing is finding other safe dogs for that dog to be exposed to,” Isaacson said.

Teaching puppies good potty, feeding and crate manners comes down to keeping a schedule — and sticking to it. Also, one way to prevent any accidents inside the house is to tether your puppy to yourself. That way, you can always keep an eye on it.

“The most important piece of advice I can give to a new puppy owner is that if your puppy has an accident, that’s on you — not the puppy,” Isaacson said. “Don’t get mad at the puppy because you weren’t properly supervising.” 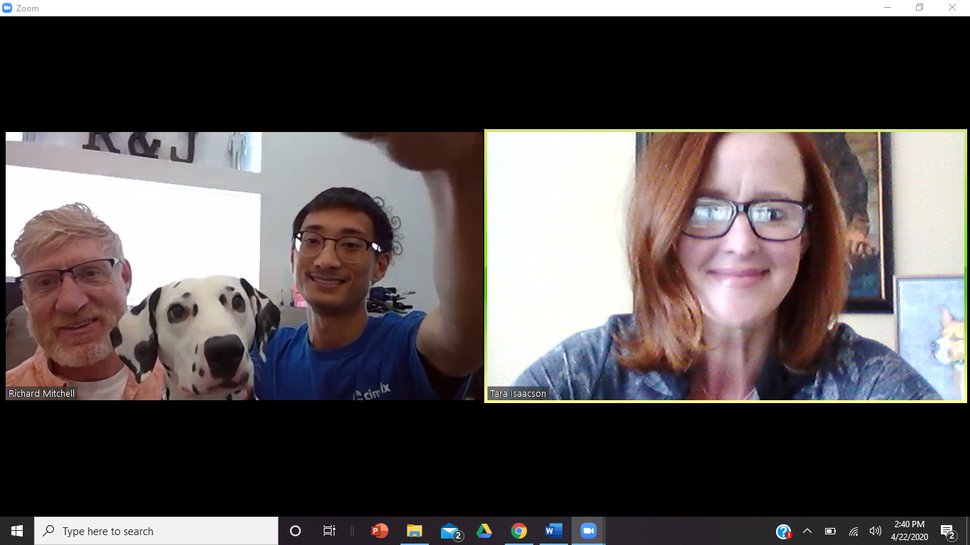 Tethering is also key to training a puppy because it gets them used to being on a leash. If you’re doing something that might take some time, like cooking dinner, also consider buying a dog bed to place in a nook close by. While tethered, the puppy is still able to experience everything going on and learns to relax and feel comfortable.

For older dogs, it’s important to be patient with them. Puppies tend to be less traumatized because they’re so young, but rescues can often have trouble adjusting to a new home.

While most people think it’s best to let their new rescue dog have free rein around the house, it may not help. It’s best to provide structure and give them a few days to decompress and get used to a routine.

“When we bring a new dog in, we walk them around on a leash in the yard and at the house, and we show them where their crates are,” Isaacson said, “… but we’re just going to take it really slow.”

Too much freedom can be “really overwhelming,” she said, especially for dogs that have been in a “frightening and chaotic environment.”

She suggests giving dogs a specific safe place, a feeding schedule and a routine, establishing them over days. “And some dogs are going to need weeks, to get into a routine, to feel comfortable,” she added.

As far as the best tool to train dogs, Isaacson recommends doing the “yes” game.

She’ll grab some food and put it in a pouch to carry throughout the game. Then, whenever she sees the dog doing behaviors she likes, she offers a piece as a treat and tells it “yes.”

Good behavior can be going potty outside; while you’re out to pick up poop, give the dog a treat for that success. Or for not jumping on furniture. Even just laying down calmly while you’re working can warrant a treat.

Anyone can modify it to their own needs and what behaviors they’d like from their dog.

It’s good for both a dog and kids to have children involved in the training as much as possible. Having kids do the yes game helps keep a dog supervised.

“By the time they leave my house, they will come to find me and sit in front of me and look because they learned that’s what I like. It’s pretty cute, actually,” Isaacson said.

“I just saw one of the puppies that was adopted out the other day, and she walked right up and looked at me and was like, ‘Where’s my food? Where’s my treat?’” she said. “So, I think that’s an easy, fun thing to do. And it’s a great thing for kids to do, too.”