Home Dogs On Top of Everything Else, My Dog Died – The Atlantic 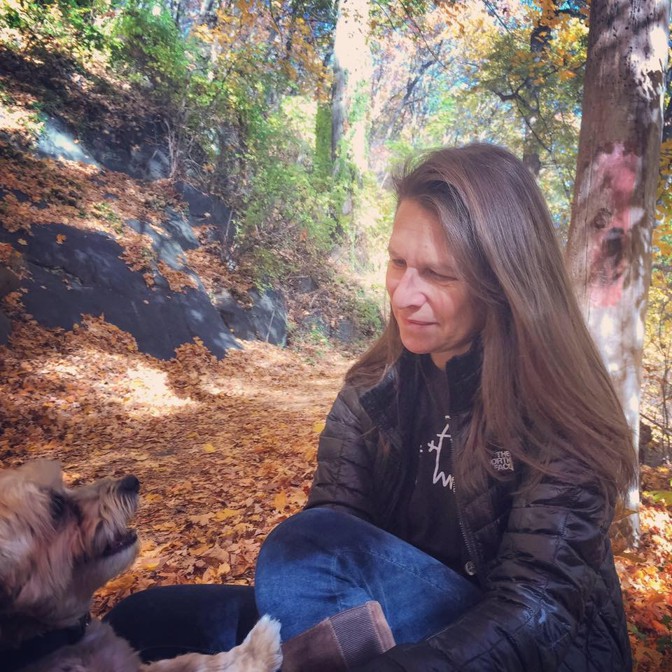 The author with her dog, Lucas, in the park. (Courtesy of Deborah Copaken)

Our dog died on tax day. Or, rather, he died on what would have been tax day, had we not been living through a pandemic. With all due respect to Ben Franklin, in this world––where the tax deadline has been pushed back until July, and we’re all under siege from an invisible enemy––nothing can be said to be certain, except death.

Five days earlier, I had stood outside the Williamsburg Veterinary Clinic, discussing the details of Lucas’s euthanasia with the vet over the phone. Humans and their novel viruses are not allowed into the vet’s office these days. So in an ironic twist of fate, during the final days of my dog’s life, he got to hang out inside a building while I shivered on the sidewalk.

“Can I at least come in and hold him when you put him down?” I asked.

“No,” said the vet. I had no idea which vet. She was just a voice on the phone. They couldn’t risk infecting their staff, she told me, and offered to let me watch it over videochat. “When you make an appointment, just let the receptionist know you want a Zoom link too.”

What about his ashes? she asked me. Did I want those? If I did, they would cost $100 more. I live in an apartment in Brooklyn, New York. It’s not as if I can bury Lucas in my backyard. I don’t have a backyard. And I don’t know what the rules are about sprinkling ashes in the East River or under a public-park tree. I say no to the ashes.

Lucas had been in decline for more than a year, losing his sight, his teeth, his will, his energy. The vet and I had spoken in person in late December, when health authorities in China were still trying to figure out why so many of its citizens were coming down with fatal pneumonia. I told her he’d become incontinent, waking up in puddles of his own urine. What’s more, things had recently taken a turn for the worse: My normally sweet dog had started growling and chomping down on our hands, hard enough to break skin, whenever my partner or I would try to take him out for a walk. A walk! Dogs love walks. Lucas loved walks for nearly 13 years until he didn’t.

We knew his time was limited, but I didn’t want him to die until my 23-year-old daughter, the unrelenting engine behind getting a family dog in the first place, could make it home. But she was sheltering in place with her boyfriend’s family in Illinois, after being evacuated from the Peace Corps. “Mom, it’s okay,” she told me over the phone. “I’d rather he not suffer.” If none of us could hold him while he was dying anyway, what was the point in waiting?

She was 10 when we brought his tiny puppy energy into our lives. Lucas was her first dog, and mine too. All of this was new to me—the training, the chewed sneakers, the unadulterated canine love, which sometimes feels like empathy. My father was diagnosed with pancreatic cancer a few months after we brought Lucas home, and he died four months later. When I’d cry about this, Lucas would lick my tears.

I made an appointment to put Lucas down. I know that’s the proper way to say it––to “put down” a dog––but I couldn’t help feeling as if I were calling a hit man to plot a murder. On the day before his death, I let him sniff around Transmitter Park without a leash, and then I fed him cheddar cheese for lunch and beef stroganoff for dinner, straight from my plate. We’d trained him so well not to beg for scraps, plus people food always gave him diarrhea, but what did it matter now?

My youngest, 13, came with me to take Lucas to his final vet appointment. Life with Lucas is all he’s ever known. We sat on the concrete floor in the vestibule between the sidewalk and the vet’s office. I called the receptionist. “We’re here to put down our dog,” I said, and I immediately broke into quiet sobs.

Read: Dear Therapist’s guide to staying sane during a pandemic

The young couple waiting six feet away for their dog to be returned after his checkup quietly slipped out, onto the sidewalk, to give us some privacy. We held Lucas in our laps on the floor and told him how much we loved him. Pull yourself together, I chided myself. More than 10,000 humans had died of COVID-19 in New York City alone, and untold more had been infected, including my family and me. Weeping over a dog felt unseemly.

Except loss is loss. It takes many forms. The loss of normalcy and schedules. The loss of hugs and dinner parties, maskless smiles and busy sidewalks. The loss of sitting with strangers in a pizza joint, enjoying a slice. The loss of salaries. The loss of health care. The loss of sleep. The loss of weddings and funerals, bar mitzvahs and christenings, graduations and family vacations. My son and I, at that very moment, were supposed to have been on a mother-son trip in London for his spring break, visiting Harry Potter World. I’d scrimped and saved, with the fruits of four jobs, to buy those plane tickets, and now both my money and my special time with my son were lost. 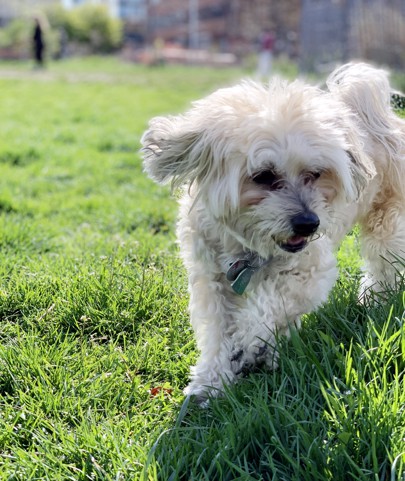 A photo of Lucas (Courtesy of Deborah Copaken)

Even before putting down our dog, I had cried, during the course of these past five and a half weeks, over losses great and small. I cried over the death of a friend and over the deaths of so many parents of friends that I’ve lost count. I cried one night at 2 a.m., when all three of us in my household were sick with COVID-19, and I couldn’t breathe, and I wasn’t sure I’d make it until morning. I’ve cried watching Governor Andrew Cuomo’s briefings. I’ve cried reading the news. I cried over my daughter’s evacuation from East Cameroon, a year and a half before the end of her service, just as she had cried when she told me she was being forced to leave her tiny village, her health-care projects, and the friends she’d made. “They won’t survive the coronavirus, Mom. They just won’t.” The three beds in her village’s health clinic had no sheets, let alone masks or respirators.

Read: My whole household has COVID-19

And now I was crying over a dog too. Our dog who, as a puppy, had licked my tears as my father lay dying and, in so doing, made me laugh.

“You ready?” The receptionist stepped into the vestibule wearing gloves, goggles, a protective robe, and a mask.

“I guess,” I said, hugging Lucas one last time and letting him go with a primal wail. My son hunched over his knees, weeping into his arms. At that exact moment, the young couple waiting for their dog walked back in and, with perfect comic timing, quickly turned on their heels to walk back out when they heard our sobs.

“He won’t be needing his leash anymore,” the receptionist said.

I removed his collar. Seeing his name on the little silver name tag made me cry anew. My daughter had named him Lucas, much to my consternation. Before her father, I’d loved a French photographer named Luc, and I didn’t want the daily reminder. But soon enough after bringing the puppy into our home, Lucas the dog had nothing to do with Luc the photographer. I was able to compartmentalize my grief over the loss of Luc’s love and keep it separate from my burgeoning love for our dog.

Read: How are parents supposed to deal with joint custody right now?

Soon enough, I knew, as my son and I walked back home in the cold April wind, clutching the empty collar and leash and each other for comfort, I would be able to compartmentalize the loss of Lucas as well. To forgive myself for not holding him as he took his last breath. To absolve myself of the guilt I felt for mourning the loss of a dog during a human pandemic.

To be alive means to lose: love, time, others, opportunities, then finally ourselves. The minute we’re born, we have one foot in the grave. Each of us knows this as we putter through life, searching for food, shelter, and meaning before the great cliff drop. And yet still we march on into the wind, tears streaming down our cheeks, clutching mementos of those we loved, however large, small, or furry.

We want to hear what you think about this article. Submit a letter to the editor or write to letters@theatlantic.com.

Deborah Copaken is a contributing writer at The Atlantic. The author of The Red Book and Shutterbabe, she’s currently at work on a new memoir for Random House, Ladyparts.

Preparing dogs and cats for post-covid life – The Washington Post

Joe Biden Has Hairline Fractures In His Foot After Slipping While Playing With His...

Why has there been a cat on this Tampa roof for...