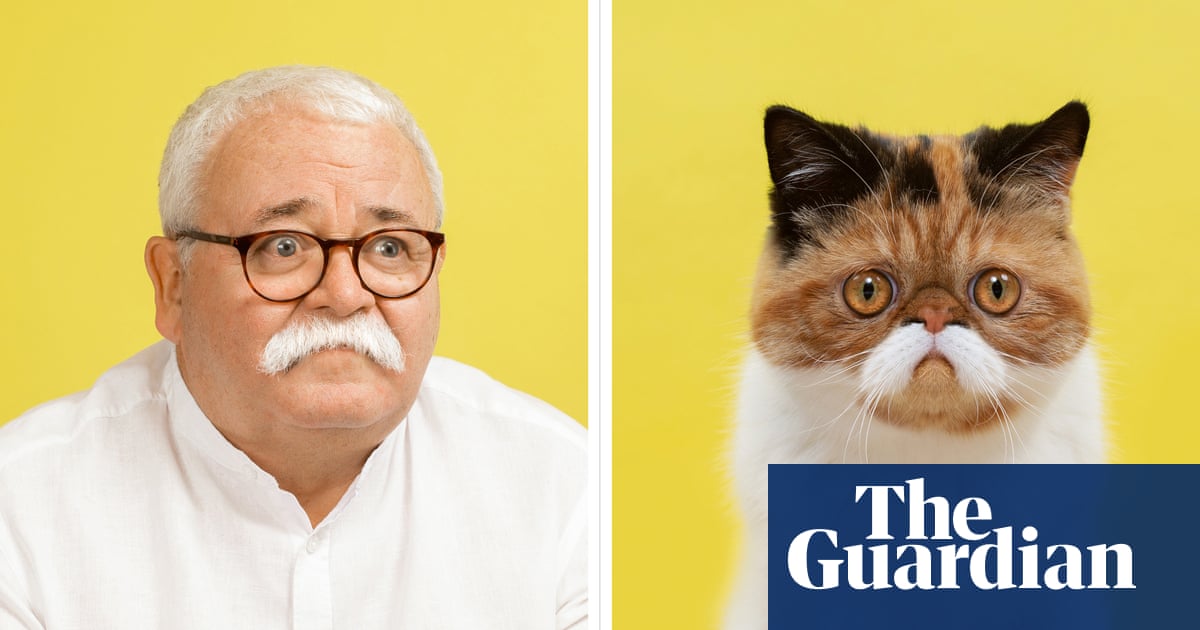 If you’ve spent much time on the internet over the past decade, chances are you’ve seen some cats on there. Cats chasing their own tails. Cats attempting ill-judged jumps from one piece of furniture to another. Or, in the case of Gerrard Gethings, a cat who looked exactly like the actor David Schwimmer. “There’s something about the shape of Schwimmer’s face that’s quite interesting,” says the London-based photographer, “and the cat had exactly the same face. That pushed me over the edge, into thinking there was something in it.”

In 2018, Gethings had created a series of photographs of dogs that resemble people – based on looks, attitude or hairstyle – which became a bestselling memory-card game, matching poodles and chow chows with their human counterparts. “Everyone’s seen someone who looks like a dog. It’s been an idea for ever,” he says. “But I don’t think people have thought, ‘That person looks a lot like a cat.’ I suppose there’s a feline quality some people can have, but not in the same way. They don’t have huge beards, or things dogs have, like a centre parting and long hair – easy matches. Cats are more difficult.”

The humans are not the animals’ real owners, but models selected through a casting process. The cat portraits came first, then Gethings sought out lookalikes, either based on the cat’s markings, a pose they unexpectedly made (one cat with its paws in the air recalled a raver; another in a pugilistic pose reminded him of a friend who’s a boxer), or, in the case of some cats, with a celebrity they brought to mind. For the cat with the white walrus moustache, Gethings’ ideal match was The Thing actor Wilford Brimley. He posted a callout on Instagram, and “someone in Edinburgh got in touch to say that her dad was his double. He was such a great lookalike that I hopped on a train and shot him at his home. They’re one of my favourite pairs.”

For the cat who looks like a Hells Angel , “I posted a picture of Hagrid on Instagram, and said, ‘Does anyone know anyone who looks like this?’ And this guy came back and said, ‘I look exactly like that.’ And he did. In fact, I think he’s a Hagrid impersonator – that’s his job.”

Everyone Gethings approached for the project said yes. “Some of them were a bit confused by the idea. But I’d already done it with the dogs, and cats are a lot better-looking than dogs, on the whole. It’s easier than saying, ‘You look like a French bulldog.’ If you say, ‘You look like a cat,’ I think people are quite flattered.”

Shooting the cats was a more arduous process, involving treats, cajoling, and “a few scratches – not to me, but to owners when the cat got fed up”. In contrast to the dogs, who willingly came into his studio, Gethings had to visit each cat at their home. Armed with cat toys and snacks, he travelled from Norfolk to Scotland, Bristol to Cumbria, knowing that there was no guarantee the shoot would work.

More than once he turned up at a house and the cat flat-out refused to come out from under the bed, until Gethings left, “feeling quite defeated and a huge failure”. Other times, he would set up the gear and lights around a small table, “and the cats would jump up and sit on the table beautifully, lick their paws and just watch what was happening as I set up the backdrop”. Then, as soon as he got his camera out, “they’d jump off and hide and never come back. It seemed almost deliberate.”

The imperious-looking cat paired with the sophisticated woman in a grey fur stole was one of the trickiest to photograph. “The cat looks really calm, but it spent the first hour hiding under the furniture, and this was probably the only perfect shot we achieved. It was motionless for a fraction of a second. It required every trick in the book: laser pointers, clockwork mice, spiders, doorbells, duck calls, birds on strings – even my son’s whoopee cushion.”

A professional animal portraitist, over the years Gethings has photographed goats, cows, sheep, pigeons and bumblebees (“I’ve learned a lot about bee behaviour – they’re really zen”), as well as the pets of celebrities, including Elle Macpherson, Gok Wan, Mark Ronson and Brix Smith Start. He started his career as an abstract painter and worked in the studio of legendary portrait photographer Terry O’Neill. But while the work was “interesting – I met a lot of famous people”, taking photos of celebrities didn’t feel like the right fit.

An encounter with a fine art book by Tim Flach, who photographed dogs in studio settings, was a eureka moment. “It had never occurred to me that you could do the kind of work that Terry did – high-end portraiture – of animals.” Around the same time, he got a border terrier puppy, Baxter, now 12 years old. Unsurprisingly, the two of them have a lot in common. “We both have beards, the same hair colour and are starting to go grey. We like cats, are obsessed with food, love the beach, share the same friends and never want to go out at night. We’re really very similar.”

• Do You Look Like Your Cat? A Matching Game by Gerrard Gethings/@gezgethings and Debora Robertson is released on 12 October, laurenceking.com

John Gray: ‘What can we learn from cats? Don’t live in an imagined future’ – The Guardian