Home Dogs When Cadaver Dogs Pick Up a Scent, Archaeologists Find Where to Dig...

On a sunny summer day in Croatia several years ago, an archaeologist and two dog handlers watched as two dogs, one after another, slowly worked their way across the rocky top of a wind-scoured ridge overlooking the Adriatic Sea.

Bodies had lain in beehive-shape tombs on this necropolis, part of the prehistoric hill fort of Drvišica, since the Iron Age. The two dogs, trained to detect human remains, were searching for scents that were thousands of years old.

Panda, a Belgian Malinois with a “sensitive nose,” according to her handler, Andrea Pintar, had begun exploring the circular leftovers of a tomb when she suddenly froze, her nose pointed toward a stone burial chest. This was her signal that she had located the scent of human remains.

Ms. Pintar said the hair on her arms rose. “I was skeptical, and I was like, ‘She is kidding me,’” she recalled thinking about her dog that day.

Archaeologists had found fragments of human bone and teeth in the chest, but these had been removed months earlier for analysis and radiocarbon dating. All that was left was a bit of dirt, the stone slabs of the tomb and the cracked limestone of the ridge.

Human-remains detection dogs, or cadaver dogs, are used worldwide on land and water. Well-trained dogs help find the missing and dead in disasters, accidents, murders and suicides. But the experiment in Croatia marked the start of one of the most careful inquiries yet carried out of an unusual archaeological method. If such dogs could successfully locate the burial sites of mass executions, dating from World War II through the conflicts in the Balkans in the 1990s, might they be effective in helping archaeologists find truly ancient burials?

On the scent of new tombs

Panda wasn’t kidding. Neither was Mali, the other Belgian Malinois trained by Ms. Pintar and her husband, Christian Nikolić. Each dog gave her final indications that day by either sitting or lying inside the flattened circle of the tombs, their noses pointing toward the burial chests within. In some cases they leapt into the small burial chests before offering an alert.

The dogs’ archaeological expedition had been initiated by Vedrana Glavaš, an archaeologist at Croatia’s University of Zadar. She already knew a great deal about the necropolis at Drvišica, having fully excavated and analyzed the contents of three tombs there. Inside each were rough limestone burial chests. She and her team recovered amber beads, belt buckles, bronze pins, teeth and phalanges. Each chest once held at least two bodies, which radiocarbon dating confirmed were 2,700 years old. The skeletal material was highly fragmented, however, and is still being analyzed.

But were there other tombs on the site, and could the dogs help locate them?

After that first preliminary search and its surprising result, Dr. Glavaš had beers at a local pub with the dogs’ handlers. They decided to hold off any discussion for a few weeks.

“We needed to think a little bit about what just happened,” Dr. Glavaš said. 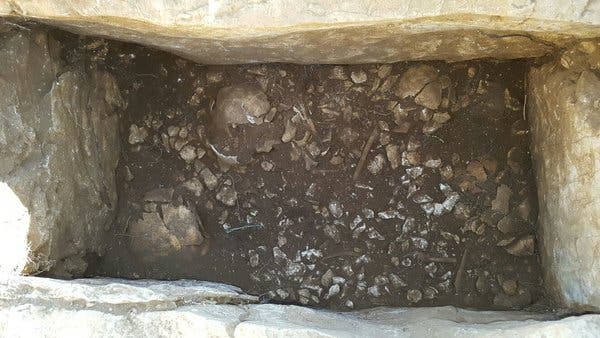 A burial chest containing the remains of at least four children, along with some burial objects, found by two dogs during a double-blind search.Credit…Vedrana Glavaš

That “test run” was the beginning of a careful study on whether human-remains detection dogs could be an asset to archaeologists. Setting up a controlled study was difficult. Dr. Glavaš had to learn the scientific literature, such as scent theory, far outside the standard confines of archaeology; the same was true for Ms. Pintar and the field of archaeology.

“I think dogs are really capable of this, but I think it’s a logistical challenge,” said Adee Schoon, a scent-detection-animal expert from the Netherlands who was not involved in the study. “It’s not something you can replicate again and again. It’s hard to train.”

And, as Dr. Schoon noted, dogs are “great anomaly detectors.” Something as subtle as recently disturbed soil can elicit a false alert from a dog that is not rigorously trained.

Nonetheless, the team returned to the necropolis for the first controlled tests in September 2015, and again a full year later. Both times, they used all four of Ms. Pintar and Mr. Nikolić’s cadaver dogs: Panda, Mali, a third Belgian Malinois and a German shepherd. They worked them on both known and double-blind searches, in areas where nobody knew if tombs were located.

The dogs located four tombs new to the archaeologists. Dr. Glavaš had suspected that a fifth site might hold a burial chest, and the dogs’ alerts, combined with excavation, proved her suspicion correct.

In September 2019, the Journal of Archaeological Method and Theory published the results of their study: “This research has demonstrated that HRD dogs are able to detect very small amounts of specific human decomposition odor as well as to indicate to considerably older burials than previously assumed,” Dr. Glavaš and Ms. Pintar wrote.

Panda and Mali aren’t the only dogs in the world that have helped locate human archaeological remains. In the United States, human remains detection dogs have aided discoveries at a variety of Native American sites, some badly damaged by looters and earlier generations of archaeologists with less ethical approaches to excavation, as well as by development and agriculture.

Paul Martin, a dog handler and trainer in Tennessee who is finishing his doctorate in earth sciences and geoarchaeology at the University of Memphis, has studied using dogs to find older remains for nearly two decades, demonstrating their capabilities at some of the large earthen mounds across the eastern United States that were once surrounded by flourishing Native American cities and villages.

His curiosity was piqued in 2002. Mr. Martin and his trained search dog were helping look for a murder victim in a Mississippi county where an informant said the victim was buried on “an old Indian mound.” The dog started showing intense interest at the mound, and Mr. Martin suspected that it wasn’t the more recent murder that held the dog’s attention.

He spoke with John Sullivan, then a state archaeologist at Winterville Mounds near Greenville, Miss. Mr. Sullivan was curious, too: “Paul asked me if dogs would pick up old stuff and I said, ‘Only one way to find out.’”

Mr. Martin started inviting experienced cadaver dogs and handlers to train on and near intact mounds. For years, they recorded dogs’ alerts on mounds in two areas of Mississippi, and even in fields nearby, where earlier mounds were probably flattened.

But getting funding and permission to do excavations is difficult. The alerts remained unconfirmed. Nonetheless, nature sometimes kicks out some free clues. That’s what happened on Mound H in Winterville, Miss., in 2006.

Rodents provided “ground-truthing,” or confirming evidence, free of charge by digging new burrows and displacing what had been hidden for centuries. Just downhill from where a number of human remains detection dogs had alerted during earlier training, “we actually saw a trail of bone coming down the side of the mound,” Mr. Martin said.

A forensic anthropologist confirmed the bones were human, including a child’s scapula. Mr. Sullivan believes they come from the last burials at the site, and date to around 1450 A.D.

Cadaver dogs are also helping archaeologists at some especially challenging sites. Mike Russo and Jeff Shanks, archaeologists with the National Park Service’s Southeast Archeological Center, had created at least 14 test holes near a promising site in northwest Florida that had been flattened during an earlier era of less diligent archaeology. They found nothing.

“We knew where it should be, but when we went there, there was absolutely no mound,” Mr. Russo said.

They then asked Suzi Goodhope, a longtime cadaver-dog handler in Florida, to bring her experienced detection dog, Shiraz, a Belgian Malinois, to the site in 2013. Shiraz and Ms. Goodhope worked the flat, brushy area for a long time. Then, Shiraz sat. Once.

Nonetheless, the archaeologists dug. And dug. They went down nearly three feet — and there they found a human toe bone more than 1,300 years old

What is the future of using human-remains detection dogs as a noninvasive tool in archaeology?

Some archaeologists, forensic anthropologists, geologists, scientists — and even H.R.D. dog handlers who know how challenging the work is — say they have great potential. But challenges abound.

Although researchers are learning ever more about the canine olfactory system, they are still trying to pinpoint what volatile organic compounds in human remains are significant to trained dogs.

It’s also unclear what concentration of human remains a trained dog can detect, and which aspects of a given environment help retain the scent.

Ms. Pintar and Dr. Glavaš speculate that at the site in Croatia used in their study, the porous and cracked limestone on the ridge might play a role in the longevity of the scent there. Perhaps the mountain itself — used as the base of each burial chest — held on to the scent for thousands of years. But more research will need to be completed to confirm these findings.

Detection dogs also must be trained for archaeology with more consistency. Often humans are the limiting factor. Sometimes, Dr. Schoon said, she can almost see a dog thinking, “Is that all you want me to do? I can do much more!”

And dogs are only a complement to more standard archaeological tools, Mr. Martin noted. The best results come when good human-remains detection dog teams are combined with ground-penetrating radar, geophysical surveys and historical information, and — when feasible or desirable — confirmed with soil tests or excavation.

But more archaeologists around the world are taking note of detection dogs’ potential. Ms. Goodhope has continued working with park service archaeologists on lost slave cemeteries, Civil War sites and other early Native American sites. And Mr. Sullivan, now with the federal Bureau of Land Management, continues to work with dogs and handlers to locate, and avoid the destruction of, Native American sites.

Since Ms. Pintar and Dr. Glavaš’s Croatia study was published last year, several European and Croatian archaeologists have asked them for help in identifying sites, too.

As for the Iron Age necropolis high on the rocky ridge at Drvišica? Dr. Glavaš said she doesn’t intend to return to excavate there.

“Something has to be left for future archaeologists.”